The Leinster Championships is over and I am sure everyone is taking a well earned rest. In spite of the fact that we were organising the event and most of us didn't compete, we still managed to win 4 classes. Clara Jones, W12, Erika Jones W16, Kathryn Walley, W45, and Jean O'Neill, W55. Special mention should also be given to Lolita Kauke who finished in 4th place on W21E despite taking over 160 minutes. Ciana Jones, Fiach O'Rourke, Alan Murphy, and Deirdre O'Neill also started but, like most others, gave up sensibly. Some of us are looking forward to better weather on Inishboffin next weekend at the Irish Championships. Bernie is also going to organise a night out in May. Watch your email for details.

Last Sunday's Leinster Championships Results.
Apologies for the delay while we sorted out a few issues.

Splits and analysis are also available at WinSplits
and SplitsBrowser.
Planner's and Controller's reports will appear later.

Leinster Championships Start List.
Control Descriptions for each course are also available on the LOC 2005 page.

The closing date for the Leinster Championships is April 1st.
The entry form can be accessed here -> LOC 2005 ENTRY FORM
Click on the link to open and print the form, or right-click on it to save the file to your computer.

Click on the LOC2005 menu on the left to see the most recent event information.

It was a crisp clear night for this year's Night event in St. Anne's Park. Thanks to Deirdre for planning her first event. Everyone seemed to enjoy the courses, apart from a certain person who thought the short course was too easy - well do the long course next time. Thanks to Tom Condon and Martina O'Kearney for helping to take in the controls. A reasonable number of people adjourned to the Dollymount House for refreshments and discussion afterwards.

This year the student intervarsity events are open to all orienteers. The event is in Wicklow this year, on the 12th and 13th of March. Venues are Mall Hill and Avondale. 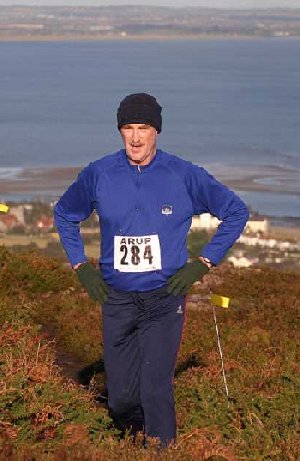 <- Gerry Smith at the recent winter hill run at Howth.

A club meeting was held in the Foxes Den in Ashbourne on Tuesday, Feb. 1st. The meeting was well attended, and discussion focussed on the ongoing preparations for the Leinster Championships. The Leinster Championships is on April 17th. Most of the main tasks have been assigned, see the LOC page for details. However if anyone is available to help please contact Tommy. We can always do with extra hands putting out and collecting controls and to relieve others so they can get a run.

A Happy New Year to all club members and other visitors to this web site.

The 2004 Leinster Autumn league is complete. On the yellow course Ciana Jones came 3rd, and Clare Hopkins 4th. Alan Murphy came 6th, and Fearghal Bourke 7th on the Light Green. On the Green Fiach O'Rourke and Jean O'Neill tied on 12th, Tommy Bourke 17th, Lolita Kauke 23rd and Erika Jones came 34th. On the Blue Ian Murphy came 12th and Val Jones 15th. The club is not doing so well in the inter-club league this year, battling with Ajax for 5th place. The Spring Cup series is still to come though and perhaps with Kathryn Walley and Mick O'Keeffe back our scoring may improve. We still need runners on the Orange and Brown.

Our next event is the night event in Saint Anne's Park on February 15th. Deirdre O'Neill is planning it this year. Preparations continue for the Leinster Championships on April 17th. Help will be needed on the day and beforehand. Please let Tommy know if you are available, don't wait to be asked.

The first event on our new map of Malahide Demesne went off very successfully. We had several scout groups and other groups and families attending as well as the stalwart orienteers from our own and other clubs. There were many compliments on Jean's long course with the Map Memory section for the first 4 controls. Thanks to Jean for Planning, Controller Val Jones, Organiser Bernie Sharkey, and helpers Ray Linn and Emma Linn, Alex Bogomoletz, Tommy Burke, Fiach O'Rourke and Erika Jones.
Bernie and Alex would like to thank everyone who contributed to their Special Olympics trip to Japan fund.
We also had a meeting in Duffy's in Malahide afterwards, mainly to discuss ongoing preparations for next year's Leinster Championships. There will be a club meeting in the Fox's Den in Ashbourne on Tuesday the 1st of February, to continue with preparations.

Thanks to all who came to Ardgillan Demesne on a beautiful morning with the sun shining and the trees in fine autumn colours. Being Holloween some kids even turned up in fancy dress. Thanks to Planner Ian Murphy, Controller Val Jones, Organiser Tommy Burke, and Ray Linn, Erika Jones, Ciara Burke and Fearghal Burke who helped out.

At the recent Munster Championships at Inch Strand in Co. Kerry Jean O'Neill won the W55. Also there were Fiach O'Rourke, Ian and Alan Murphy.

<- Eileen Young with Orla and Fiona at Ardgillan.

At the Northern Ireland Championships last Saturday, Oct. 9th, Jean O'Neill won the W55 class and Erika Jones won the W14 class. Also there were Val Jones, 4th in M45, Fiach O'Rourke, also 4th in M16, Tommy and Fearghal Burke, and Bríd Lafferty in the entry on the day course. The event was held at Tollymore Forest park near Newcastle, Co. Down. Tollymore is one of the nicest forests in the country to run in. It is mostly white mature woods with a mixture of coniferous and deciduous trees. The longer courses started with a short section on the open mountain south of the forest, fairly typical Irish mountain terrain.

The Veteran's Home International was held the previous weekend at Carlingford. Jean O'Neill and Val Jones from the club were selected on the Irish team. The relays were held on the Saturday on the Fox's Rock side of the map. The individual competition was held on the Sunday in conjunction with the first event of the autumn league on the eastern side of the map overlooking Carlingford Lough. While the weather was reasonable on the Saturday conditions deteriorated badly on Sunday morning. The Brown course of the league event was cancelled and indeed there were 2 people who needed to be rescued off the mountain. This even made the newspaper on Monday - ironic that it takes bad news for Orienteering to get a mention in the press.

Several Fingal members, including Doug Corrie and Ciaran Young, took part in the Mourne Mountain Marathon. We hope Doug will give us a report.

Fiach O'Rourke, Erika Jones, and Meghan O'Driscoll from the club travelled as part of the Irish Junior team to the Junior Home International in the Lake District in England. The individual event was held near Grange over Sands in an area a bit like the Burren. The upper section of the map had areas of flat limestone rock with sections of scattered trees. The side of the hill was a very technical deciduous forest, which proved very challenging for the Irish juniors. The relays were held at Cartmel racecourse - famous as the location where a certain horse called Gay Future ran in the 70s as part as a betting scam. The area consisted of fast open parkland and sections of tricky deciduous woodland.

Jean O'Neill attended the World Masters Championships in Italy over the summer. She came a very respectable 18th in a large field in the W55 class.

The club events this autumn are at Ardgillan on October 31st, and at Malahide Castle on December 12th. The Ardgillan event is being planned by Ian Murphy, and the Malahide event by Jean O'Neill.

Bernie and Alex would like your support
Club members, Bernie Sharkey and Alex Bogomoletz are holding a table quiz in Fingallians GAA club in Swords, on Thursday, September 16th, at 8.30. They are travelling to the Special Olympics in Japan next year as interpreters with the Irish Team. The quiz is to raise funds for the team. As well as the Table Quiz there will also be a raffle and spot prizes. Please come along if you can and bring your friends. For more details contact Bernie at alexandbernie@eircom.net.