Thanks to all who came to our event at Howth. In spite of the wet weather and heavy showers we still had a very good turnout. Apologies for control 5 on the Long course, which was too high and not on the right crag. Also apologies to those who started early on the short course when the tricky sections were not taped. All 3 courses were tougher than expected due to the conditions and the rampant gorse growth, particularly on Sheilmartin hill on the other side of the golf course. Having the registration and start at the Deerpark hotel proved successful, and we are grateful to the Howth Estate Company for allowing us use it. We are also grateful to the Howth Golf club for allowing us cross the golf course and use Sheilmartin Hill, which is their property. Thanks to Ian Murphy for planning, Val Jones for controlling, and Mick O'Keeffe, Tommy Burke, Bernie Sharkey, Alex Bogomoletz, Ray Linn, and Jean O'Neill for helping. 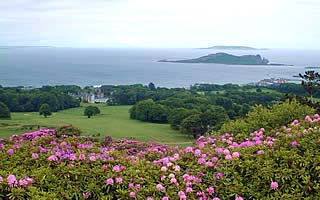 Our next event is at Howth on Sunday, April 2nd. This year parking and registration will be in the carpark of the Deerpark Hotel in the grounds of Howth Castle. There will be 3 courses on the day. Start times as usual from 11.00 AM until around 13.00. To get there follow the road to Howth and just before the town turn right through the gate of Howth Castle, then go up past the castle to the car park. You can also take the DART to Howth. It is about 1 kilometre walk from the station.
Deerpark Hotel and Howth Castle

Junior Prizes for the 2005 Autumn League have been given out. Fingal prize winners who got nice trophies with their names on them are as follows
1st Junior, Green Course - Alan Murphy
3rd Junior, Blue Course - Fiach O'Rourke
3rd Junior, Yellow Course - Ciana Jones

The Spring Cup is nearly completed - the final event is on Sunday, 26th March, at Glandasan, Wicklow Gap. Three out of Four events count for prizes in the Spring Cup, and many places are still open. In the inter-club league Fingal have done well this year moving into 4th place behind CNOC, Setanta, and AJAX, but ahead of GEN and 3ROC as well as DFO and the student clubs. Our improvement is due to having runners on every course, and having a good number of juniors. Also helping us was that 3 league events were in our 'territory' north of the Liffey.

Although the league is finished a bit early this year in March, there are plenty of championship and other events to come before the summer. The Munster Champs is near Nenagh in Tipperary, on April 9th. It should be possible to drive to it and back on the day. Details are on the BOC site

Ajax are holding the Leinster Champs on the Bull Island on April 23rd. If you've never been to a regional championship event before then this is your opportunity, and you've no excuse since it's right on our doorstep. Details at AJAX web site, and you can even enter online there.

The Irish Championships as usual will be held on the May Bank Holiday weekend, April 29th, 30th, and May 1st. Click here for details. Again, it is within easy reach for most of us using the M1 and there's no need to stay overnight. The rules for entering the relays on the Monday are very flexible. The club will pay for relay teams so if you want to run for the club send an email to Tommy - tommyburke@eircom.net

WEGO and CNOC are holding an Irish 3-Day on Inishboffin on the June Bank Holiday weekend. Several club members are planning to go. Click here for details. If you missed the Irish Championships last year on Inishboffin this is your chance to see what everyone was raving about.

Our first event in Deerpark Wood went off very well. Most people enjoyed their run in the mixed woodland, which was the first time in the forest for most. There were some complaints from Brown and Blue runners about brambles, mainly in one area. Comments were generally complimentary on Tommy's courses. Thanks to Tommy for planning, Dónal Ó Murchú of CNOC for controlling for us again, Val Jones for organising, Bernie and Alex for registrations, Ciarán and Eileen for the string course and generally helping out, Lolita and Jean for collecting controls, David Smyth for taking in the string course, and Deirdre, Sarah, and Ciana for helping out and clearing up.

All of the above mentioned adjourned for refreshments and to see the end of the Ireland/Wales match to the Lakeside Manor Hotel. We had a discussion on holding a Summer evening league of 4 events on Thursday evenings in late May / early June. Details will be formalised soon.

Our next event is a Spring Cup event at Deer Park wood, Virginia, Co. Cavan. It is a new location for open orienteering, although it has been used before for army events. It is a nice reasonably flat mostly deciduous forest on the North shore of Loch Ramor.  Tommy Burke is planning, with Donal O Murchú of CNOC obliging us again as controller.  SportIdent will be used for the event. Parking and Registration will be at Virginia Rugby club, just a short distance out the Ballyjamesduff road from Virginia. Take the N3 to Virginia, and watch out for speed traps !

Course details are as follows:

A calm clear night, no rain, frost, or wind - ideal conditions for Night Orienteering in St. Anne's Park.  We had record turnout of 57 for a Dublin By Night event, perhaps even for any Irish night event.  There were several who had never done orienteering before, never mind Night-O, including adventure racer Vanessa Lawrenson.  We used our new vandal-resistant plate and chain controls for most control sites.  They all stayed in place, and some commented that they made the orienteering more interesting since they were more difficult to spot.  The promise of spot prizes enticed record numbers back to the Dollymount Inn afterwards.  Local knowledge helped former Irish champion Aonghus Ó Cléirigh win the long course.  Another ex Irish champion was first female. Colm McKenna won the short, with Roxanne White first female. Thanks to Deirdre O'Neill for planning, Val Jones for controlling, Jean O'Neill for putting out controls and registration, David Smyth and Jim Hoare for collecting controls, and Una May for helping with calculating results.