There will be a club meeting on Tuesday, the 7th of September, in the Fox's Den in Ashbourne at 9 PM. The main topic for discussion will be the club events for the coming season. We will have local events on Oct 31st and on Dec 12th. The venues are not decided yet. Any volunteers to plan/control/organise these events are most welcome. We will also hold a night event on Feb. 15th in St. Anne's Park. We are not running a league event this time, but our big event of the season, indeed our biggest event ever, will be the 2005 Leinster Championships. It will take place at Carnawaddy, near Ravensdale, Co. Louth, on April 17th. The full list of events in Leinster will be available soon.

Three Fingal juniors have been selected for the Irish Team going to the Junior Home International, on the 4th and 5th of September. This year Erika Jones and Meghan O'Driscoll will be joined by Fiach O'Rourke. The event takes place in the Lake District in NorthWest England. All positions on the Irish team were not filled this year. For any other juniors out there if you follow Fiach's example and put in the effort to train and go to Championship events you too can become an Irish international. 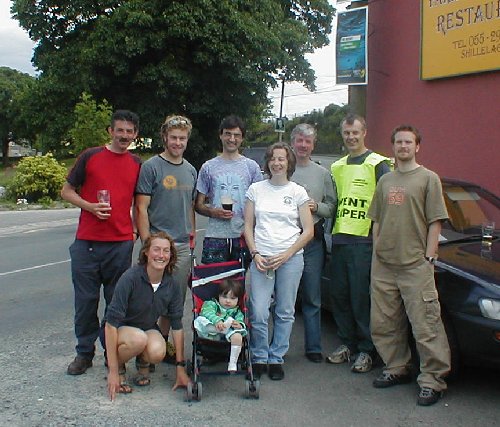 The Fingal Orienteers team came 13th out of 27 teams in this year's Wicklow Way Relay, last weekend, 12th June. This year the weather stayed dry for the whole event, and most of the paths of the Way were dry, unlike previous years. There were good crowds gathered at the changeover points to watch the race progress in the sunshine, especially at Glendalough and Drumgoff. There was a large crowd at the finish at Shillelagh to cheer the finishers. Other club members taking part in other teams were Val Jones and Deirdre O'Neill.

The summer hill running league continues on Wednesday evenings. It continues to grow in popularity with more than 200 runners taking part in some of the races. Details, and the full Wicklow Way relay results are on www.imra.ie.

Our second event in Howth was quite successful, in spite of some light drizzle. Enough people turned out having recovered from the Irish Championships, and despite the alternative mountain run attraction. We even had some tourist competitors from as far away as Australia. Those who came seemed to have enjoyed the challenging courses set by Michael O'Keeffe. John McCullough thought the long course was the most navigationally and physically challenging he had run for a while. There were many comments on the fine views, the flowering bluebells and rhododendrons, and the smell of wild garlic. On the negative side while the gorse was burnt off on the southern side it is still growing rampant in other places. Let's hope we will have another fine summer and some more of it will be burnt off. Thanks to Michael O'Keeffe for planning, Bernie for organising, and Alex and Jean for helping out.

<- Fiach O'Rourke leads the pack at the start of the IOC relays.

The Irish Championships took place in Kerry over the May bank holiday weekend. Members of the club travelled down and stayed in a rented house near Castlegregory. This year the event took place over 3 days including for the first time, I believe, a sprint-O championship. Each day was on sand dunes, which made a pleasant change from the rough boggy mountainside of the Leinster Championships. The Sprint-O championships took place on the Saturday on Banna strand. This was not a new map, but was not familiar to many from outside of Munster. Only a short section of the dunes was used. Nevertheless it was ideal for Sprint-O, with short legs and plenty of controls requiring concentration at all times. Even minor errors were severely punished. For Fingal Eileen Young was 1st in W35, Erika Jones 3rd in W14, Kathryn Walley 3rd in W40. The Sprint-O event was followed by a training event. The weather was fine and sunny, and some of the juniors, including Erika and Meghan, went swimming in the Atlantic surf.

On the Sunday the main Irish Individual Championships took place on Inch beach. For those who don't know it this is a unique spit of sand dunes stretching 5 kilometres into Dingle Bay, and over a kilometre wide for most of it's length. Some of the dunes are nearly 50 metres high. Unlike other sand dune areas in Ireland it is not heavily grazed and so for most parts it is sandy underfoot with extensive maram grass growth. It had been used over 15 years ago for an Irish 2-Day event. For this event the area was extensively resurveyed and updated. The resulting map is excellent despite the comments about aerial photographs in the event notes. The new map conforms to the IOA colour specifications for a rough open area, but personally I preferred the white background of the old map where the contours stood out better. There was very little else apart from contour features on the map. The courses planned by Rory Costello were very challenging including a variety of leg lengths and changes of direction. As with the previous event here many perplexed orienteers were to be seen standing on the top of the dunes. The day was also fine and sunny, and even though there was a stiff breeze on the beach, it was very warm running, or trying to run, in the dunes and the water at the water stations quickly ran out. Fingal results were Eileen Young, 2nd W35, Meghan O'Driscoll 2nd W14, Ciaran Young 3rd M21S, Jean O'Neill 2nd W55

The Irish Relay Championships took place on Monday morning at Maherees, near Castlegregory. This was a small map, also a sand dune area but with some flat expanses grazed by cattle. It was more like the Curragh than Banna or Inch and was very fast, if you were still able to run after the previous 2 days. There were about 60 teams entered from most clubs in the country. However in most of the junior classes only BOC had a competitive team. Fingal had 3 teams. The W14 were the fastest team in the class but since Erika ran 2 legs they were non-competetive. The Premier Open team of Fiach O'Rourke, Val Jones, and Ciaran Young came 5th, while the W Open team of Jean O'Neill, Eileen Young, and Deirdre O'Neill came 7th. Unlike the previous 2 days there were some very heavy showers, but the views over the bay of the clouds lifting off Mount Brandon were spectacular. Relays take a lot of organisation but there is a special atmosphere at them that is something extra to normal events.

Overall it was a very satisfying event that was well worth the journey. I particularly liked the inclusion of the Sprint-O Championships, and it was good to see the relays well supported by the clubs. Hopefully clubs will pool resources so the event will continue to be held as a 3-day event on the May bank holiday weekend.

Mountain Bike Orienteering got off to a sunny start on a 'scorcher' of a day at Carrick Mountain, after an absence of a couple of years with the last event being run in 2002. Fingal O had the honour of running the first event in the four event MTBO League. The event proved to be a great success with 32 competitors participating. This is a lot for MTBO in Ireland !!!!. The A Course, which was run as a Score Event, proved to be the most popular with 28 competitors. The B Course had 4 competitors.

In the A course the competition was tough - Justin May demonstrating he still has what it takes coming out on top with a score of 730 out of a possible 790. In second place, Martin Flynn had the same score (and visited the same controls) but took 9 seconds longer than Justin. (See their route choices on the maps displayed here on the site). The top five was completed by three more competitors with 700 points each, again separated by seconds. The ladies competition was dominated and won by Nina Philips, who was 7th overall, with Mary O'Connell taking second.

Because of the smaller numbers it was decided that the classes would be M/W 20 or less, M/W21+ and M/W40+. First overall was Justin May an M40+ competitor. Next M40+ was Brian Bell. Amongst the ladies, Mary O'Connell was first in the W40+ class and Nora Lalor was second. There were no competitors entered in the M20 or less class although Mick Mangan and his young son Ben teamed up to put in a fine performance notching up 450 points.

The B course, was a standard point to point event over 9.25K and 14 controls. This was won by Niall McAlinden, with Anne McKenna taking the ladies first position.

The event appears to have been enjoyed by all so there is great excitement about the rest of the league. MTBO is back and hopefully will grow from here.

Thanks to Ray Linn for taking entries and Deirdre O'Neill for helping take in controls. A special thanks to Setanta member Gerry Brady very efficiently doing the painstaking job of calculating the scores and times to produce the results.

Next events:
Sat 8 May - Cronybyrne
Sat 22 May - Clarabeg
Sat 29 May - Croghan Kinsella