The Fingal Scatter league is completed. The results of the 4 events are available here and the final league table based on the results.

Prizes were given out after the event on Sunday Sept 18th at Newbridge House. Congratulations to all prizewinners. Everyone who completed 3 events got a prize and some left over prizes were given out as spot prizes. We hope you all enjoyed the events. Let us have your feedback and we will decide what we will do next year.

The format of all league events are the same. Three courses available: A, B and C. Participants on the A Course will be required to get any 18 of the 20 controls, 12 controls are required on the B course and 7 or 8 on the C. Competitors can visit the controls in any order, provided they punch in the correct location on their control card.

The events will start with a mass start, i.e., everyone starts at the same time, with the winner being the first person back with the correct number of controls.

Points will be given to each competitor on course according to their position and these will carry through into the other events. The best three of the four events will be taken into account at the end. The Points system is similar to the Leinster League and the Dublin By Night League

Maps are pre-printed and control descriptions are printed on the map.

Other Fingal events for the coming season are a local event in Ardgillan Park on December 10th, a Night-O event in Santry Woods on January 30th, and a League event on Carnawaddy on March 25th. 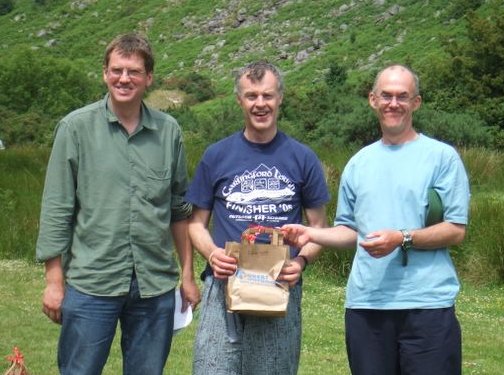 At the annual Setanta Rogaine Doug Corrie and Val Jones came 4th overall, and 1st Male Vets. Doug and Val pictured here with Dave Weston, chairman of Setanta, at the prizegiving in Glenmalure. 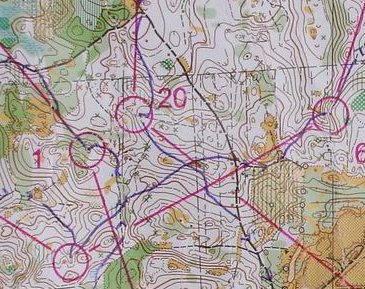 Lolita Kauke who has been with us for the last 2 years and participated in many events has returned home to Latvia. We wish her all the best. She has suggested we make a club trip to the Latvian 3-Day next year. Here is a sample of a map from Latvia.

Many club members took part in the annual Wicklow Way Relay, including a Bayer Fingal comprising of Mick O'Keeffe, Kathryn Walley, Val Jones, Lolita Kauke, and work colleagues of Val Jones, and Gerry Brady of Setanta. The team came 22nd out of 28 teams on a very hot day in the Wicklow Mountains. Hill running continues on Wednesday evenings until the end of August

The Irish 3-Day was a great success on the June Bank holiday weekend. The weather was fabulous and the scenery was fantastic. The courses were generally short but maximum use was made of the complex terrain of hills, rocks, and marshes with very few linear features. The organisers were so pleased that they plan to do it again in two years time. Click here to see some photos.

Many people have been asking about our proposed summer evening league. Unfortunately we have to postpone it until September. Fingal County Council require a special insurance indemnity which we are unlikely to get in time after the IOA insurance renewal date in May.

Report and Pictures on the Spring Cup in Denmark by Fiach

Many club members are planning to go to the Irish 3-Day on Inishboffin on the June Bank Holiday weekend. Although the early entry date has passed you can still enter through the CNOC web site. Click here for details. If you missed the Irish Championships last year on Inishboffin this is your chance to see what everyone was raving about.

April was a busy month for orienteering.  The Munster Championships were held at CastleLough Woods near Portroe in County Tipperary. It was a small but mostly runnable wood on the shores of Lough Derg, with some intricate contour detail.  The 1.5000 scale, 2.5 M contours, and SportIdent combined enabled the maximum usage to be made of a small area.  Prizewinners from Fingal were Ciana Jones 2nd W10, Erika Jones 2nd W16, and Deirdre O'Neill 1st W35.

Lineup for start of IOC 2006 Relays

The Irish Championships took place over the May Bank Holiday weekend.  Since it has become a 3-day event it has truly established itself as the highlight of the orienteering calender.  All 3 days were held on Carlingford mountain in County Louth.  In spite of being used many times before including a previous Irish Championships and 2 Leinster Championships Carlingford never fails to provide both technically and physically challenging courses.  The organisation by GEN and 3ROC was up to the standard of a big international event and the weather stayed dry for most of the weekend - only a brief shower during the relays on Monday. In the Middle distance event Donal Kearns was 2nd in M10.  In the Long distance event Padraig Kearns was 1st in M14B, Donal Kearns 2nd in M10, and Val Jones 3rd in M50. ( 2nd Irish ).  In the Relays the boys team of Sean Flynn, Padraig Kearns, and Sean Mooney were 2nd in J48-, and the Jones Girls team, Erika, Clara, and Ciana 3rd. In the Premier Open Fiach O'Rourke had a great first leg run, keeping up with the elite runners. Veterans Val Jones and Ciaran Young couldn't keep up the pace, but still finished 7th ahead of GEN, UCD, and an Italian team. The girls team of Lolita Kauke, Eileen Young, and Deirdre O'Neill finished 5th in the W Open.