Some photos are here

Kathryn and Tommy are running a series of 3 Sprint Events in Co. Meath in April and May, including an event on the famous Hill of Tara. The 3 events are as follows

The events are on 3 new areas mapped by Tommy. The events are to promote orienteering in Co. Meath among school groups, scouts, and others. Further details will be announced shortly.

We had the largest attendance at a Fingal event for some time, with over 170 competitors, at our league event on our new map of Castletown House Demesne in Celbridge. There were some favourable comments about the unexpected technicality of the forest section, with comments such as ".. like scandinavia". There were some not so favourable comments from some older competitors about how tough and mucky it was and having to cross some of the deep gullies. Our decision not to use SportIdent was probably justified as we lost 2 controls and 2 other punches. Apologies to those affected, mainly the later runners on the Brown and Light Green courses.

Thanks to Pat Farrelly of CNOC/DFO for controlling, Val for Planning, Sarah for organising, and all the helpers on the day, Tommy, Ray, Ciaran, Ian, Dave, Bernie, Deirdre, Pat, Jim, and Fiach, and not forgetting Lauren and Orla.

The Irish Championships are coming up soon, on Bere Island in West Cork on the May bank holiday weekend. There will be quite a large Fingal contingent there, and 6 teams have already been entered for the relays. If anyone else is planning to go and wishes to run on a relay team please let Val know. Individual entries can be made online on the Cork O web site. 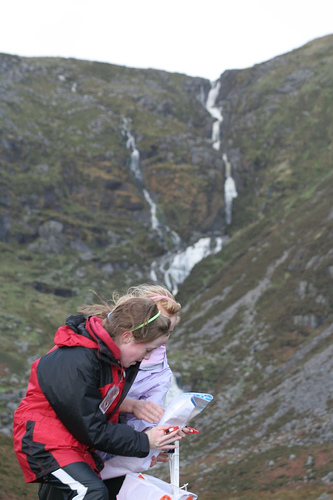 There was a good turnout for our event at Malahide Castle, December 9th. It was also a lovely dry clear morning and there were plenty of members around to help out so most people also got to do the courses as well. The courses were planned by Éamon Ó'Briain, with assistance from his son-in law Alan. It was great to have him avaliable again to take on the planning. Éamon is a long time in orienteering and a one-time member of Mactire. Thanks also to everyone else who helped out, Telmo and Ciana for putting out and collecting controls, Bernie and Deirdre for doing registration, Ray, Sarah and Alex for starts and finish, and Ray for doing the results and putting them up on the web.
We also had a social get-together on Sunday, December 16th in Duffy's in Malahide. About 10 members turned up for some pre-Christmas food and drink.

There wasn't a great turnout at the recent club meeting in Ashbourne. Main discussions were for the event in Malahide, and progress on our new map of Castletown, which is just about complete. Eamon O'Briain is planning the Malahide event.

The Irish Relay Championships and the Munster Championships were held over the October Bank Holiday weekend by Waterford Orienteers. At the Irish Championship relays in JFK park, Wexford, Fingal won the Handicap 12 class (Jean, Kathryn, and Deirdre) and came second in the Junior 40- class. The senior team were 6th in the Premier Open, with only teams from CNOC/DFO, Ajax, and CorkO ahead of them. At the Munster champs the next day Shane Hoare came 2nd in M12, Ciana Jones 3rd W12, Jean O'Neill 2nd W60, Eddie Hogan 1st M70, Erika Jones 2nd W18, Val Jones 3rd M50, Deridre O'Neill 3rd W35. The weekend provided two contrasting events. JFK park was very fast running, yet the intricate detail on the map ensured that concentration on orienteering had to be maintained at all times. Mahon Falls was very rough and slow going, mostly open mountain in the Comeraghs with some rocky sections but not that much intricate contour detail.

Report by Fiach from the JUNIOR WORLD ORIENTEERING CHAMPIONSHIPS in Australia.

This years scatter league was a great success with nearly 100 runners coming to the last two events in St. Anne's park amd Newbridge House. In fact there were nearly that many at the first event in Swords if the junior squad was counted, while numbers at Santry were lower because of the Irish Park-O championships on the same day in Athlone. There was good competition for prizes in most categories, particularly among the juniors. Also our objective of introducing Orienteering to newcomers was achieved. We welcome new members, the Twohig and Andrade family, and some old faces who returned.

Thanks to all who helped out with the 4 events, Jean, Deirdre, Bernie, Alex, Ray, Sarah, Mick, Tommy, Fearghal, Doug, Jim, and John. I hope I haven't forgotten anyone. Hopefully we will run the league again next September, so spread the word and tell you friends what fun these events are. Congratulations to all prizewinners, especially club members Shane Hoare, Emer Ní Eafa, Ciana Jones, Kathryn Walley, and Telmo Andrade.
Mike Long, Gerard Butler, if you are reading this, Tommy has prizes for you.

These events are suitable for all ages, and all levels of fitness and experience. Come along and give Orienteering a try. 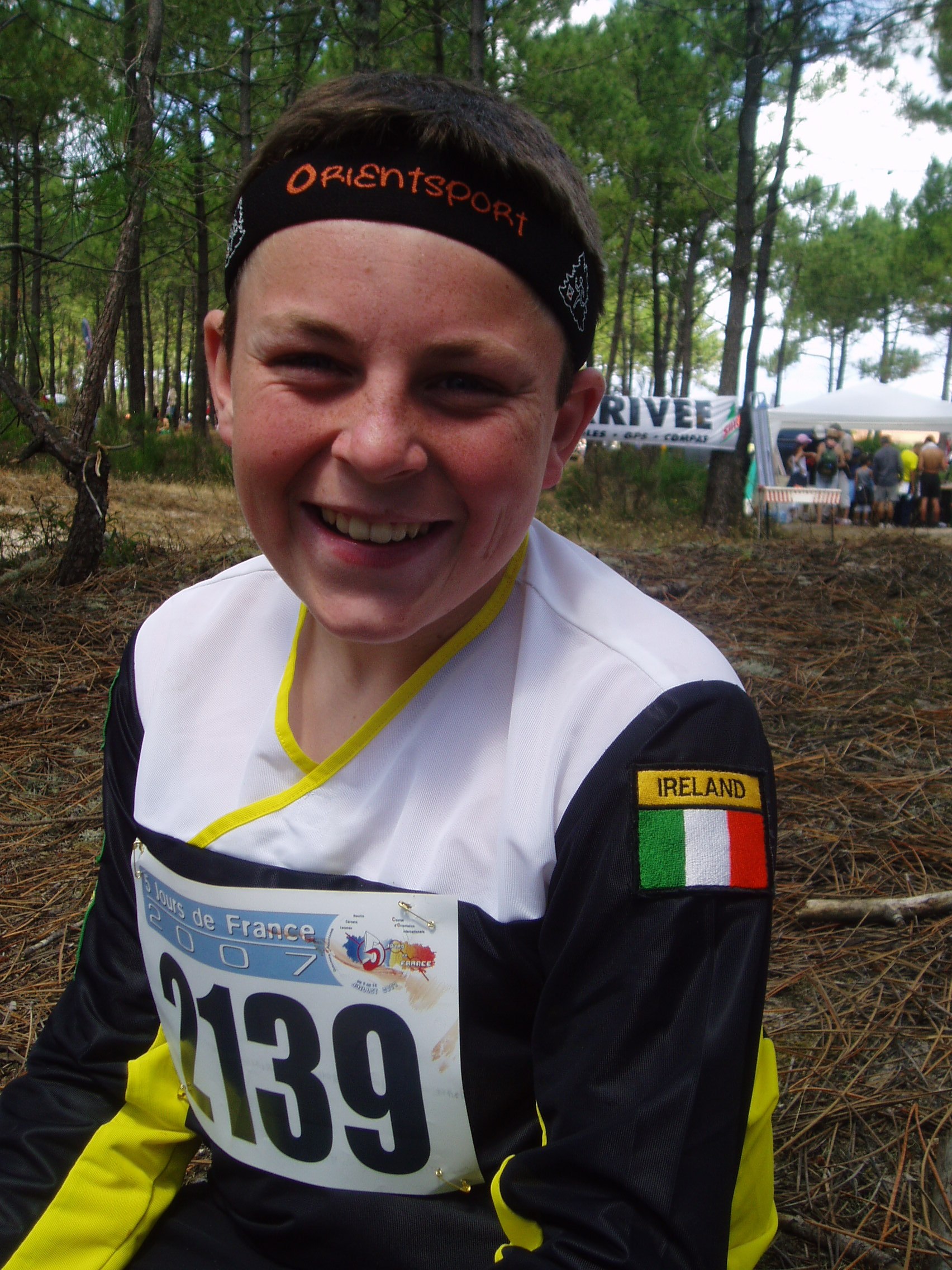 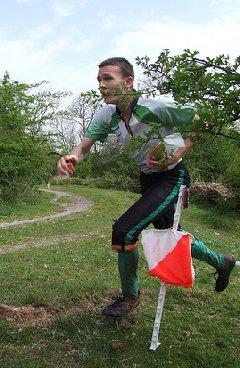 
Fiach O'Rourke is traveling to the Junior World Orienteering Championships in Australia in July. A fundraising event to help with his travel costs will take place at Ward River Valley in Swords, on the 24th of June.

The Shamrock Oringen 3-Day takes place on the June Bank Holiday weekend. It is being held as usual by Cork Orienteers, and takes place on the Sheep's Head peninsula in West Cork. The terrain is promised to be classic West Cork open mountainside with complex contours and fast running. Details on www.corko.net/shamrock where you can also enter online.


The Irish Championships took place on the last weekend in April. It was organised by Fermanagh Orienteers. Both days were nice and dry but not too warm, ideal conditions for orienteering. This year the weekend only consisted of a classic distance event and a middle distance event. There were no relays, but their absence was somewhat mitigated by a Trail-O championships on the Sunday. The classic event on the Saturday was in a new area, Conagher and Callow Hill, west of Enniskillen. It was similar to some other Fermanagh areas - open hills with intricate contours and some hazel wooded and semi wooded areas. The longer courses visited some rough wooded areas in the western section of the map. The eastern section was very dry after the dry weather in April but was still tough going. If it had been normal Irish conditions I'm sure the times would have been considerably longer. Fingal prizewinners were Jean O'Neill 1st W60, Fiach O'Rourke 3rd M20, Val Jones 3rd M50, Ciana Jones 2nd W12, Rachel Barrett 3rd W14, Sarah Ní Ruairc 1st W21S, Kathryn Walley 3rd W45.

The Middle distance event was held at Crossmurrin, an area used before for the Northern Irish Championships and JHI. The terrain was similar to the previous day, mostly open with some areas of scrubby hazel woods, and also runnable due to the dry spell. Fingal prizewinners were Jean O'Neill 1st W60, Ciana Jones 3rd W12, Shane Hoare 3rd M12, Fiach O'Rourke 2nd M20, Eddie Hogan 3rd M70. It was also possible for everyone to participate in the Irish Trail-O championships after the middle distance event. The trail was mainly along the road leading into the Marble Arch caves visitor centre. The event was mainly planned and organised by Alan Gartside with assistance from LVO members.