The Next Fingal Event is on Sunday, May 15th at Newbridge House, Donabate, Co. Dublin.

Details are as follows

The event will feature a Compass Challenge course, planned by Eamon O'Briain (survivor of Mactire)

1. This a challenge event comprising of 5 stages.

2. You decide the level of difficulty you think you can manage.

3. You will be given a map with just control circles, no numbers or codes

NOTE: Distances given are `as the crow flies' but be mindful you are not a crow.

You are recommended to have a compass with angle degrees marked on it. However it is possible to do it without a compass if you have a good sense of direction and distance.

Starts from 11.00 until 1.00. Registration in the main car park in Newbridge House Demesne. Exit M1 north of Swords and follow signs for Donabate/Newbridge House.

Everyone was very complementary of the event and the new map of a nice forest in a new part of the country for orienteering. The numbers at under a hundred were a bit disappointing but the distance, and perhaps the tolls, probably deterred some people. The rain held off until the event was nearly finished so conditions were pretty good for running. The ground was pretty wet, and 2 marsh control sites were actually ponds on the day. Thanks to all Fingal members who helped out on the day, and to controller, Nigel Foley-Fisher.

We had a very good training day in Mullaghmeen on the day before the Derrycassin League event. 28 people attended, and Fiach went through several exercises, including pacing, using a compass, contour exercises using a map with just contours, and a micro-O course. We are very grateful to Fiach for coming over for the day. Unfortunately he had to rush back to Wales for a Badminton tournament and couldn't come to Derrycassin. We are also very grateful to Setanta for giving us the map of Mullaghmeen for the training.

The next Fingal Orienteering event is at Derrycassin Woods, Granard, Co. Longford, on Sunday, Feb 20th

This event is the first 2011 Spring Cup event. The usual 6 league courses will be on offer. Derrycassin is a new map for orienteering mapped by Val Jones in 2010. It is a small but mostly runnable forest with just a few sections with brambles and rhododendrons. The trees are mainly coniferous but there are some sections with older deciduous trees scattered amongst the newer plantation. The woods were once the demesne of Derrycassin house, now just a ruin. The wood stretches along the shore of Lough Gowna, the source of the river Erne. There are some contour details, including a nice example of an esker ridge.

Parking and registration will be at the forest entrance, Grid Reference N 311 860, Lat 53°49'23" Long 7°31'36". Derrycassin GAA grounds are just beside the entrance. We are in talks with them and the club house may be open to us for teas, coffees, showers, and other libations.

Directions - from Dublin take the M/N 4 Sligo road as far as Edgeworthstown, then take the N55 north to Granard. In Granard turn left off the main street, then take the first right. Travel 5 Kilometers north, then turn left at a crossroads where Derrycassin Woods is signposted. The entrance to the wood is just a short distance down this road.

On Saturday 19th Feb, the day before the league event at Derrycassin, we are having a training day in Mullaghmeen. This follows on the successfull weekend we had last year in Rossmore. Fiach is coming over again to run most of the exercises, which will still be at the same level as last years. As well as pacing and compass exercises there will be more concentration on contour exercises, as Mulaghmeen provides some nice terrain for this. We have booked some houses in Arvagh for the weekend. Grid Reference for Mullaghmeen N 478 778. There are 2 ways to get to Mullaghmeen from the Dublin direction. Take the N/M 3 to Kells then take the road to Oldcastle. About 7 Kilometers before Oldcastle the road to Oldcastle goes right up a hill. Keep going straight on at this junction. After about 7 Kilometers this road ends at a T junction with the R195. Turn left here, then take the first right shortly after that. Continue on this road for about 4 Kilometers to a cross roads. Turn left at the cross roads and continue for about 3 Kilometers until you come to a right turn into the forest. Drive in to the main car park. You can also take the N/M 4 as far as Mullingar, then take the R394 to Castlepollard. Continue on the R394 towards Finnea. About 4 Kilometers after Castlepollard take a right. 2 kilometers later take a left at a T junction, then continue for about 3 Kilometers to the forest entrance, on your left from this direction. For those staying in Arvagh on Friday night the best way appears to be to go to Finnea, then continue on the R394 towards Castlepollard, then turn right 4 Kilometres before Castlepollard and follow the above directions.


The night event in St. Anne's Park went ahead on Tuesday, Dec. 7th, in spite of the snow. 19 dedicated orienteers turned up and most said that once they got moving it was a nice still night for a run, with plenty of light reflected from the snow. The hot drinks provided by Anyta were much appreciated. Thanks again to all who came, results are here 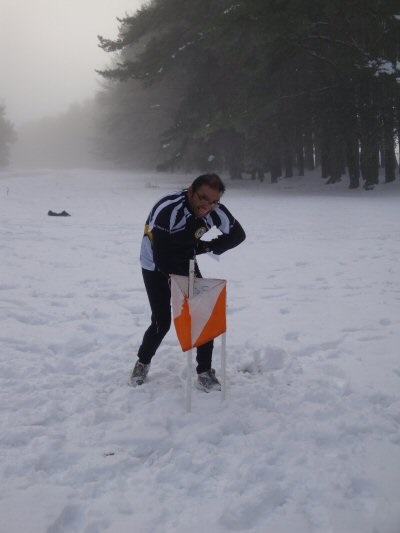 Alex orienteering in the snow in the Curragh on Dec 5th.

Anyta has a second lot of the new club tops. Contact her if you ordered one, or if even if you didn't and would like one.

The next Fingal event is a Night Orienteering event in St. Anne's park, Raheny, on Tuesday December 7th, starting at 6.00 PM.
We had hoped to use somewhere new for our night event this year but after failing to get permission for Malahide Castle, ALSAA sports grounds, and Castletown we had to revert to St. Anne's.

The Kearns Family model the new Fingal Gear. If you want one of the new club tops contact Anyta at 086 8588577 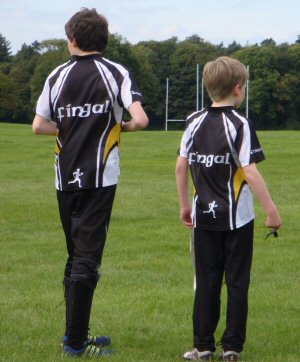 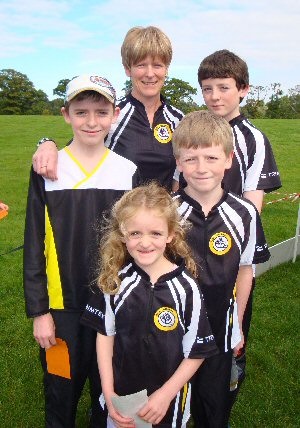 The 2010 Scatter League has completed, with a great final event in Malahide where we got over 160 entrants, a record for a scatter league event for us. Congratulations to all prizewinners, there was keen competition in all categories this year. Thanks to all who helped out, the planners Gerry, Alex, Dave, and Rory, Organizers Ray, Bernie, Anyta, and Val, and Controllers, Val, Bernie, Ian, and Dave, and everyone else who helped out, Tommy, Jean, Ciana, Clara, Eoin, Kathryn, Pat, and Deirdre. And of course, thanks to all who came to take part in the events and made it worth the effort for us. Hopefully we'll see you all again next year.

Results for Malahide are here

Results for Ardgillan are here

Results for Newbridge House are here

Results for River Valley are here

Thanks to everyone who came, we had a record number for River Valley and thankfully the rain held off until after the finish.
Next Sunday's event, the second in the Scatter league, is in Newbridge House Demesne, Donabate. Registration will be in the car park. Format is the same as River Valley, Long Course get 18 controls, Medium 12 controls, and Short 8 Controls

This event is suitable for everyone, including beginners, all ages and levels of fitness. Registration will start at 11.00 AM, with all runners starting on each course at the same time, at 12.00 or soon after that.

The Fingal scatter league returns this September. The events are as follows

Event format will be the same as in previous years. There will be 3 courses available, Long, Medium, and Short. Long course runners will need to get 18 controls in any order. Medium course will get 12 to 14 controls, short course 6 to 8 - exact number will be announced at the start. All runners on the long course will start at 12.00, the medium 2 minutes later and the short 2 minutes after that. Registration for each event will be from 11.00 to 12.00. Please come early so you don't miss the start.

Next Fingal Events are two Sprint events, on the Hill of Tara on Sunday May, 16th, followed by Ardgillan Park on Sunday May 23rd. There will be 2 courses at each event, a long and a short. However they will both be sprint courses, short but with plenty of controls 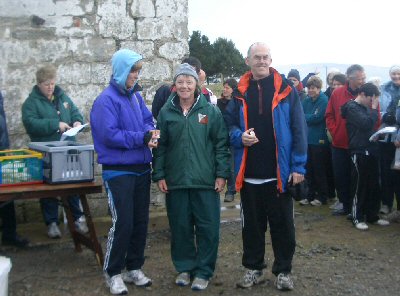 On the Sunday the relays took place on a different section of Magilligan on the inside of the peninsula. It was mostly flat and very runnable but still had a few tricky depressions and army constructions. Fingal had 7 teams entered, which was 2nd only to Cork. However only 2 teams featured in the prizes, the J48 team of Shane Hoare, Ciana Jones, and Sean Kearns and the H18 team of Jean O'Neill, Val Jones, and Kathryn Walley, both came 2nd in their class. 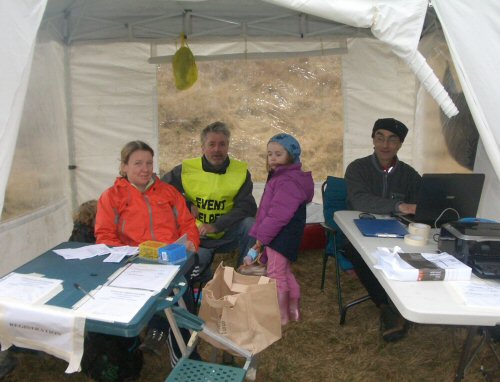 Great weather, mostly dry and runnable terrain, and a turnout of over 100 in spite of an alternative hill run attraction made Carnawaddy a very enjoyable event. There was very close competition on a tough Brown course among Irish Team aspirants David Healy, Ruairi Short, Colm Hill, Ciara Largey, and Niamh O'Boyle. There were very favourable comments on the courses planned by Dave Richardson, and the teas and coffees were much appreciated afterwards. Results are here
and some photos are here

After the fine weather and sunshine brought out a great crowd to the first Spring Cup event at Bull Island, we hope the momentum will carry through to the second event next Sunday, at Carnawaddy, County Louth. At this stage the forecast is for the fine weather to continue so Carnawaddy should be mostly dry and runnable.

Assembly and registration will be on the east side of the mountain near Omeath. Parking will be in 2 small laybys and along the road, about one Kilometer north on the Windy Gap / Long Woman's Grave. Grid Reference J 125 144. Maps are printed on A4 waterproof paper and will not be bagged. Control Descriptions are on the back of the maps, and will also be available at registration. Brown, Blue, and Green are pictorial, Orange and Yellow are text. Light green are pictorial on the back of the map and text paper slips.

Directions: From Dublin / south, take the M1 to the exit north of Dundalk, then follow the signs for Carlingford / Greenore. After about 5 K, just after a school, take a left turn signposted for Omeath. Take the right fork at a Y junction, then right at a T junction, then left immediately up the hill. Continue on that road for about 6 K to the Windy Gap, then keep left at both junctions. From the north take the road to Omeath from Newry, then turn right in Omeath, then right at the Windy Gap.

The event area consists of rough open mountainside. Most crags are tagged crags. Untagged or line crags are used for clarity in places, particularly for facing crags. They are mostly in just one section of the main mountain. Whether a crag is tagged or not is not an indication of the size of the crag. Apart from indicated paths there are other less distinct sheep trails and off-road vehicle tracks not mapped. Finally, no dogs on the mountain, even on leads.