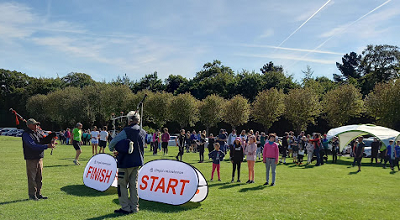 The final event of 2022 Scatter league took place at Malahide. We had fine dry weather and a large entry including scout groups from Portmarnock, River Valley Swords, and Ardlea Whitehall. Thanks to all who came. We had the prize giving for the league with prizes for the first 3 in each category as well as a few special prizes.

Apologies for control 111. It was at an alternative location proposed for it, not the location on the map. The courses were adjusted so only 17 counted on the long and 12 on the medium.

Hopefully next year we will return, and revert to 4 events in the league.

Please let us know by email or before the start at Malahide if you are in the wrong category. There will be a prize giving when everyone has finished for first 3 in each category.

Ciaran giving directions at the Start

Thanks to all who came out to the Ardgillan event on Sunday in spite of the weather. The rain really came down just as we were starting at 12. Everyone came back safely if pretty wet. At least it wasn't cold. There's something satisfying in getting out and braving conditions like that.

Thanks to the O'Donnell brothers Liam and Eoin for planning the event, and Ciaran Young for controlling and organising. Also Ian and Chris for SI, Bernie and Nicola for registration, and everyone else for helping. 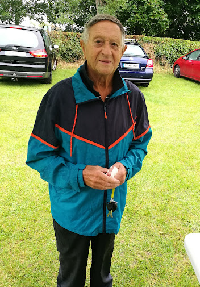 The final event will be in Malahide Castle next Sunday, 18th. Lets hope we get better weather. 2 out of the 3 events count towards prizes. 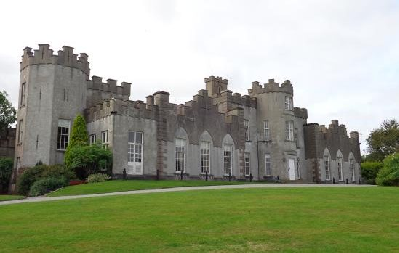 The second event will take place at Ardgillan Demesne (Castle) on Sunday, September 11th, https://ardgillancastle.ie. The third and final event in the league will be at Malahide Park on September 18th.

These are come-and-try-it events and so are suitable for beginners and families, with mass starts at each event at 12PM.

For those using public transport, the 33 bus, which goes to Lower Abbey St towards Balbriggan, alight at the ‘Ladyies Stairs’ between Skerries and Balbriggan, use the stairs to cross over the road and railway and climb the hill all the way to the top of the park. If driving, follow the permanent road signage for Argillan Castle from Balrothery. Parking will be in the overflow carpark, on the grass to the left at the first roundabout once you enter the park.

Toilets are available near to the parking/start, in the normal paved car park area.

For those coming to the event with children, Ardgillan Castle has a tour which can be booked and a playground along with a café.

Please also note that for each of the scatter events, Sportident will be used. SIAC will be enabled (again!). 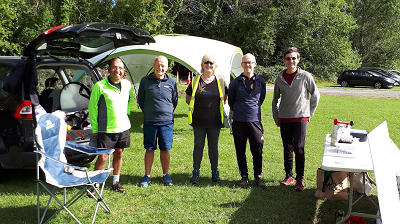 Thanks to all who came to the first 2022 Scatter League event at Newbridge House. We had a fine sunny morning after the overnight rain. It was good to see many new faces as well as the regular Leinster orienteers. Results are on the Orienteering Ireland website. There were a few hicups but they should be sorted now. Let us know of any issue. We have finally moved on from using punch cards for the scatter events. Mind you one guy missed certain advantages of punch cards over SI for these events. It was also good to have the club founder Frank Flood attending.

The 2nd event is at Ardgillan Demesne next Sunday, September 11th. Ardgillan is between Skerries and Balbriggan. There are plenty of brown county council signs to the park from the M1 and from Skerries.

The best public transport option is the 33 bus. Get off at the coast between Skerries and Balbriggan and take the footbridge over the railway into the park, then walk up to the car park.

The event format is the same as at Newbridge House.

The IOA coach Mark Stephens ran the first introduction to orienteering at Newbridge. He will be continuing at Ardgillan. 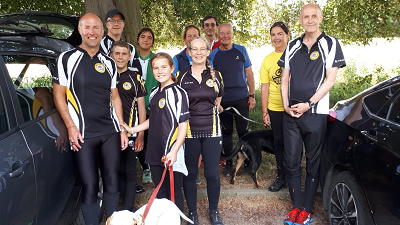 The Fingal scatter series is back!

Three courses will be available; long (collect 18 out of 20 controls), medium (collect 13 controls) and short (collect 8 controls). Points will be given to competitors at each event and prizes will be awarded to overall winners at the final event in Malahide Park.

For those using public transport, the Dundalk/Drogheda train, which leaves from Pearse, Tara St and Connolly stations, goes to Donabate, a 15 minute walk from the park. The 33b bus, which goes to Donabate from Swords, stops outside the main gates of the park. If driving, follow signs for Donabate on the M1. The park is located on the R126 close to Donabate village.

For those coming to the event with children, Newbridge House Demesne also has a farm which can be booked online. There is also a cafe.

Fingal Orienteers are looking forward to seeing you all at our first scatter event since 2019!. 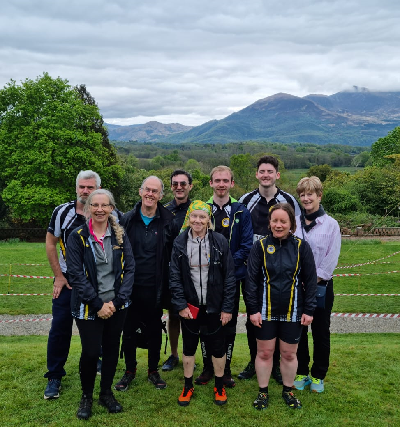 Some Fingal members after the IOC relays in Killarney National Park.

The Irish Championships finally took place in Kerry on the May bank holiday weekend, 29th April - 2nd May, having been originally planned for 2020.

Cork and Kerry Orienteers put on a great weekend assisted by a few others, including our own Sarah Ní Ruairc. The event was centred in Killarney where plenty of accommodation and other attractions were available. The event probably had the highest ever entries for an Irish Championships. There were visitors from Norway, Sweden, and Switzerland including 2 buses of Scandinavian senior orienteers, mostly in the M/W 60, 65, 70 classes.

Day 1 was a sprint event in Muckross house. Muckross has been used many times going back to the eighties, but I believe it's the first time for a sprint event around the house gardens. The map by Tony Cotter was excellent and it was quite technical and different to the more typical urban or campus sprints.

Day 2 was the Middle Distance championships at Cappanalea adventure center. The Saturday was a lovely sunny day with great views of the Magilicuddy reeks. The terrain was tough going, on open moorland boggy in places and plenty of heather.

Day 3 was the Long Distance or classic Irish Championships. It was held on the more typical West Cork / Kerry open terrain of complex contours and abundent rock features. The final controls on most courses were in a very technical forest. Cork O ran this day on the Crohane Lake map that was used for the World cup event and many Shamrock Oringen events. There was a little bit of drizzle but it didn't impact very much on the competitors.

Day 4 was the Irish Championship Relays held at Knockreer House and surrounding parkland, part of Killarney national park. The slope outside the house was a great location for viewing the spectator control and changeover, but it did add a climb back up to the finish. The terrain was not as technical as Muckross but was a good relay area.

In the relays our junior team of Liam and Eoin O'Donnell and Sinead Young came 3rd in the J48 Class. It's good that we were able to field a junior team again.

We also had 4 other teams in the Premier Open and the Handicap 18 class.

Photos from the 4 days

The Rally of the Lakes was taking place in Killarney on the weekend. A lot of the rally followers were cruising around at night showing off their motors. Sometimes it seemed like a competition to see who had the loudest exhaust. 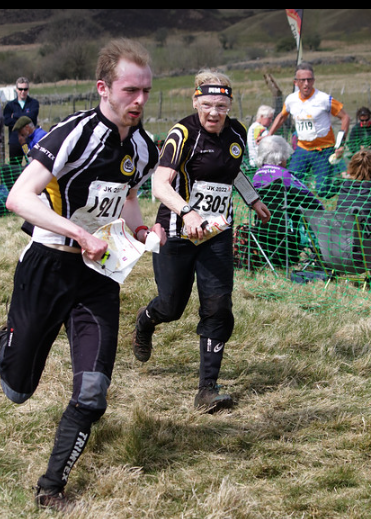 The JK” is named after a young Swedish orienteer, Jan Kjellstrom, who was instrumental in starting off orienteering in Britain. He was the son of the founder of the Silva compass company but he was killed in a car accident in 1967. The JK is held in a different region every year but hasn’t happened since 2019 due to Covid. In 2011 the JK was held in Northern Ireland. The competitions consist of a sprint, middle, long and relay over the four days, starting at Swansea University, then two events on areas of open limestone hills and old mine workings, followed by a relay in an army camp. It’s a great event to attend if you’d like a taste of big international competitions. 110 Irish travelled to the JK and 10 Fingal Orienteers club members participated over the four days.

My experience of the JK this year was great. I discovered that Wales has a beautiful landscape and definitely one of the greatest places to travel on holidays or sightseeing. The event was also amazing because I got to meet new people. It's been a while since I had seen crowds that big and there was plenty of time after my race to meet new people and become friends.

There is a big set up for the events and it was very well organised, with shuttle buses up to the start and afterwards when you're done your race there were food stalls and shops orienteering kits, o-shoes and compasses.

The orienteering itself was great and was a different terrain than what I was used to but when I wasn't orienteering we went on hikes, built a campfire and went camping in a tent. The orienteering courses were tough and sometimes when I was out on the course I was so focused on not losing contact with the map that I forgot the little things like checking out the number on the markers.

I feel it's a big step up to the level of the courses set at the Jk but if you stay in contact with your map and keep a good pace you could perform very well. But my overall experience of it was great and I would do it again next year.

Photos From organisers and attendees