Fiach O'Rourke and Clara Jones appeared on the BBC2 Northern Ireland sports program SEASON TICKET. They were at a junior squad training weekend which took in the FermO event at Crossmurrin. The TV crew were there filming and many of the juniors were filmed running over the wind swept hills.

Ian Murphy is organising new club suits. If you would like one then email him directly - imurphy AT gofree.indigo.ie or send an email from the emails page. The suit details and size chart can be seen at the Compass Point web site here The one we are going for is the black, white, and yellow Silva Eclipse suit.

Our next event is the night orienteering event in St. Anne's Park on Tuesday evening, 24th January. Deirdre O'Neill is planning it again this year. The start and finish will probably be in the same place as last year and we will probably use the vandal-resistant controls that we used in Ward River Valley.

Our first Australian style Street/Park event at Ward River Valley was very successfull and enjoyed by everyone. Click here for Results. The long course was dominated by Hill Runners. The mass start was great fun with runners all heading in different directions, then passing each other out on the streets and in the park. Many ran down dead ends and climbed uncrossable walls. There was much discussion afterwards back in the River Valley community centre where tea, brack and biscuits, as well as showers were availed of. Prizegiving took place at 1.40. Congratulations to Jean O'Neill for planning and organizing the event.

The Connaught Championships took place this year in Portumna Forest park. The map was updated for this event by Padraig Higgins. This forest had not been used for about 8 years. No extensive felling had taken place so the forest was nice and mature, and mostly very runnable. It's probably one of the nicest forests in the country. Unfortunately, there were no first places, thus no prizes, for Fingal. Ciana Jones was third, Clare Hopkins 5th in W10, Clara Jones 2nd W12, Erika Jones 2nd in W16, Kathryn Walley 3rd W45, Padraig Kearns 2nd M12, Andrew Walsh 4th M14, Fiach O'Rourke 3rd M18, Val Jones 5th M50. 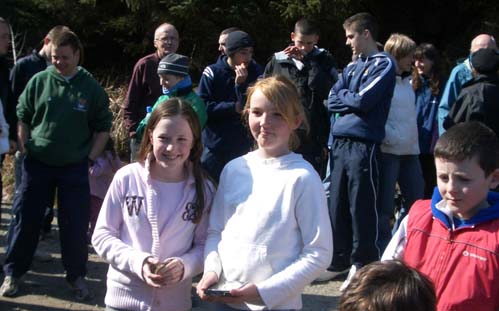 Ciana Jones and Clare Hopkins find a tree to climb in Portumna.

Our next event is in Ward River Valley, Swords

FIRST EVENT at this location. This is a mass start, scatter event.
START AT 12.NOON. 20 controls are scattered around a wide area, both in the valley and on the streets. YOU CHOOSE YOUR OWN ROUTE.

Controls are red/white metal plates, 7.5 X 6 inches, with punches attached. They will be lying flat on the ground.

REGISTRATION is in the River Valley Community Centre, opposite Loreto Convent and the park. There are toilets. Tea will be provided afterwards where runners can compare notes and prizes will be given out in different age categories, male and female. There is a bar upstairs which will be open.

From South- Exit M1 at Airport/Swords exit. Take R132 to Swords. 1 mile past airport turn left after Texaco garage at BOROIMHE sign. Go straight though traffic lights after 1/2 mile, turn right at roundabout, Community Centre is on the right.

From North- Exit M1 at Skerries/Donabate/Swords exit. Drive towards Swords, follow Swords bypass to end (4 roundabouts), 500m after last roundabout turn right at BOROIMHE. THEN AS ABOVE.

Event will be signposted from Boroimhe and also from the Lord Mayor's pub at south end of Swords main street.

We put on this autumn league event at relatively short notice, at the request of the Leinster Fixtures secretary, Deirdre, to ensure there would be 5 events in the autumn league. This gave us a chance to use the map updated by Padraig Higgins for an army event. We got 113 competitors on the day which is probably the most we have ever got in Dún A Rí. It was also good considering that several regulars were away at the VHI and very few from LVO or FERMO turned up, probably also at the VHI / National event in Northumberland. The planning took advantage of SportIdent to make good use of the southern section of the forest and keep runners off the paths. We were also greatful to the local landowners, Gene Murtagh and John Carolan for allowing access to their land so the longer courses went up the hill to the 'Dún'. The day was ideal and the autumn colours in the deciduous sections were very nice. Most people enjoyed the courses, although one or two complained about crossing the river and the fences. Unfortunately David Dare of Setanta suffered a fractured ankle. I hope he recovers quickly. Thanks to Val Jones for Planning, Tommy Burke for Controlling, and Ciaran and Eileen Young for organising and operating SportIdent. SportIdent certainly took a lot of the load off us on the day. Also helping were stalwarts Bernie and Alex, and Ciana Jones, Clare Hopkins, and Erika Jones.

Sportident is being used for this event. Some of the forest has been thinned. There are numerous tractor trails in the wood that are not mapped. The undergrowth is mostly low and has been flattened in many places. However gaiters are recommended.

The event will be signposted from Kingscourt. The entrance to the Forest is about 1 mile from the town on the Carrickmacross road.

Our next event is Autumn League event number 4. It will be held in Dún A Rí forest park near Kingscourt, Co. Cavan. Val Jones is Planning, Tommy Burke is Controlling, and Ciaran Young is organiser. We are planning to use SportIdent at this event. 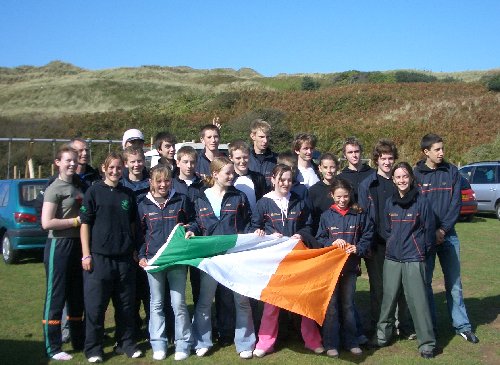 <- The Irish Junior Team at the JHI in Wales.

Erika Jones ( 5th from left in front row ) was part of the Irish Jumior team at the JHI near Swansea. Part of the sand dune terrain can be seen behind.