Fingal Orienteers membership is drawn mainly from North Dublin city and county, Co. Meath and Co. Louth. Membership is open to everyone, whether they are interested in orienteering as an elite international sport, an adventure sport, or an excuse for a family day out in the woods and hills.

Membership fee is €20 per family or per adult individual. The membership is now a once off fee, not an annual membership, since the TIO newsletter is no longer published and distributed to members. As a club member you get IOA membership, reduced fee at most events, and ability to enter the Irish Championships. Also the club usually pays for club relay team entries and subsidizes juniors travelling to international competitions and members attending orienteering related courses. There is a special membership of €10 for juniors who's parents are not members. Please contact any of the people listed here, or send us an email.

You can also email us at fin@orienteering.ie

Club meetings are held usually at 6 to 8 week intervals. Club meetings are now zoom meetings since 2020. However we may revert to in person meetings or possibly a hybrid format. The main informal club communication is now via the WhatsApp group. The teamer website is also used for event and meeting invites and documents. The club also uses Facebook, Twitter, and Instagram for publicity. Social meetings are sometimes held after club events at a convenient hostelry.

We also have a number of members who are keen hill-runners.

Please send us a message, with a valid email address. We will respond as soon as possible.


Emails are private. They will be responded to if they have a valid email address and a response is required.

The Club, Fingal Orienteers, was founded in April 1988, as recorded in TIO. 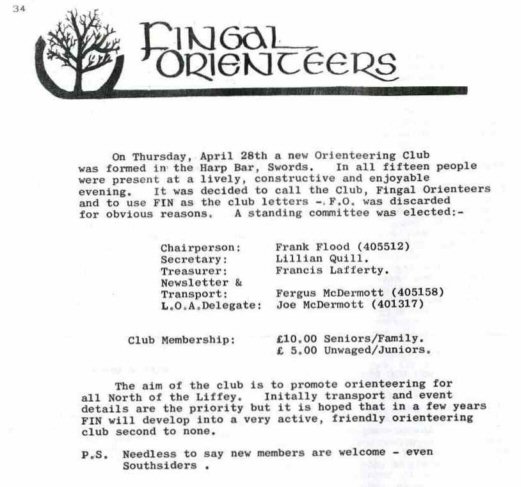 Trim Orienteers were active at that time, they subsequently merged with Fingal in 1993. Tommy Burke and John Rowe are surviving members from Trim O.

The club went through a low patch in the late 90s with many of the founding members less active. However new members joined after 2000 and club grew again to be able to host the club's first major event, the Leinster Championship, at Carnawaddy in 2005. The club held another Leinster Championship in Rossmore in 2009, and won the Leinster inter club challenge trophy. The trophy was retained in 2011

The club hosted the Leinster Championships again in 2013 on the 25th anniversary. The venue was Cahore sandunes in Wexford. The club has probably the most dispersed areas mapped of Leinster clubs, with maps in counties Dublin, Meath, Louth, Monaghan, Cavan, Longford, Kildare, Kilkenny, Donegal, Wicklow, and Wexford. The club hosted the relay event of the Senior Home International at Carnawaddy in 2013.

The hightlight for the club was hosting the Irish Championships in 2018. After many years preparation 28 members decamped to Donegal for the May bank holiday weekend and put in a lot of hard work but really enjoyed the experience. The success of the event exceeded all expectations. You can read the details and view the reports and photos on the IOC2018 page.

The most recent major event the club ran was the 2020 Leinster Championships, on an updated version of Carnawaddy. It finally took place in October 2021 after being postponed 3 times due to Covid. The next major event for the club should be the 2027 Leinster Chmpionships. 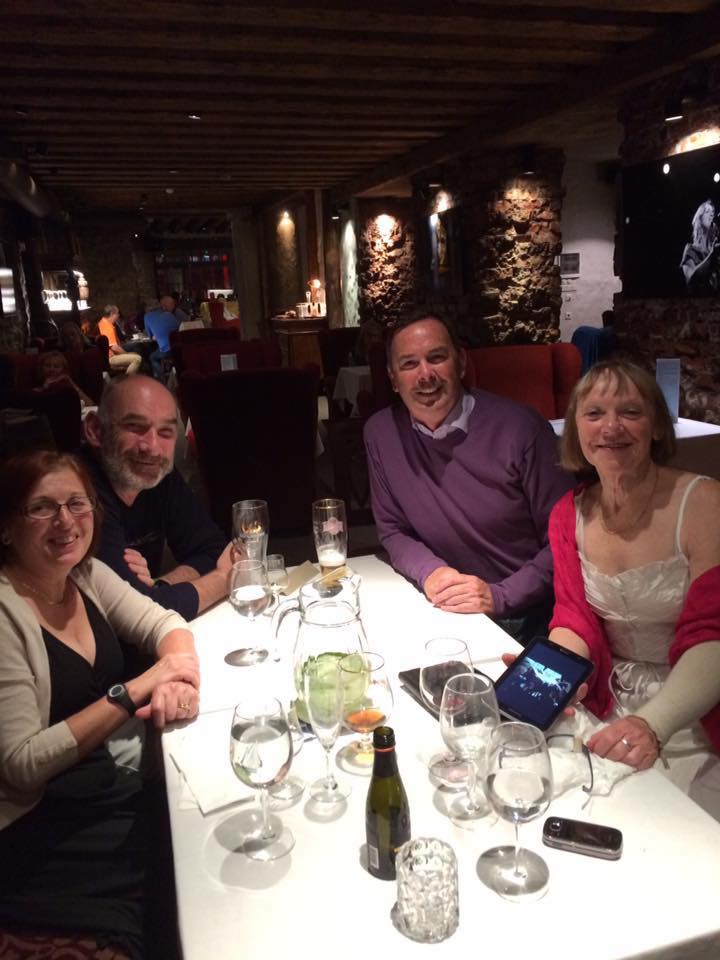 Frank with Dave, Anyta, and Jean during the World Masters in Estonia, August 2016

Frank Flood, a founding member of our club was recently made Ambassador of Ireland to Estonia.

In 1989, Frank Flood and Francis Lafferty, both teachers at the Donahies Community School near Donaghmede, founded Fingal Orienteers, the first orienteering club in North Dublin. Many orienteers will remember Frank during the 80s and 90s as a regular on the orienteering circuit. In 1995 he left his job as a science teacher and joined the Department of Foreign Affairs. This was followed by stints in Ethiopia and in Boston. On his return to Ireland he divided his time between Dublin and Belfast, working for the inter-governmental division of Irish Aid. Despite his busy schedule he still managed the odd appearance at our Malahide events in September! Finally, in September 2014 Frank presented his credentials to the Estonian President as Irish ambassador. Anybody who knows Frank will know that he is an absolute gentleman with a great sense of humour. Good luck from everyone at Fingal Orienteers!