Next up is the Irish Championships in Donegal on the May Bank Holiday weekend. Many club members are planning to travel for the 3 day event. If you haven't already done so please let Val Jones know if you are interested in running on a club relay team. 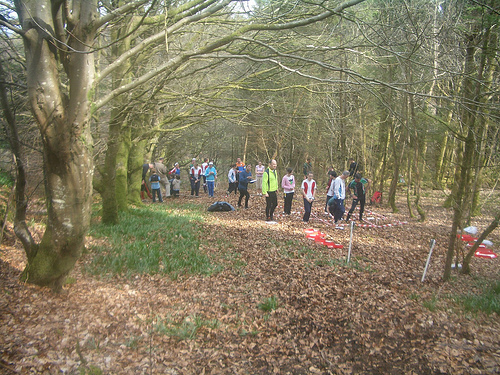 The Leinster Championships 2009 is finally behind us. The event was a great success, everything went off without any major hitches, the weather was mild and dry. All comments on the event and the courses were very complimentary, with one or two 'constructive' criticisms.

Thanks to all who helped out on the day and in preparations beforehand to make the day such a great success
Organiser - Tommy Burke
Controller - Igor Stefko (LVO)
Planner - Val Jones
SportIdent - Ciaran Young, Ian Murphy, plus assistance from Martin Flynn
Entries - Eileen Young
Online Entries - Val Jones, Ray Linn, plus assistance from Martin Flynn, Fachtna Healy
Putting out controls - Tommy, Val, Ciaran, Igor, Dave Richardson
Registration - Bernie Sharkey
Tea Tent - Anyta Ticknor
Start - Dave Richardson, Alex Bogomoletz, Telmo Andrade
Manned Control - Alan Murphy
Finish - Sarah No Ruairc
Prize giving - Jean O'Neill, Ciaran, and Bernie
Control Collection - Sarah, Igor, Andrea, and Katarina Stefko, Rory Dunne, Clara and Ciana Jones, Pat Ryan, Dave, Deirdre O'Neill
Other general help - Erika Jones, Fiach O'Rourke
plus many other tasks and odds and ends got seen to by all of the above and others, please forgive me if I haven't mentioned you.
Also thanks to the Monaghan Red Cross for being on hand on the day. Thankfully they didn't have many injuries to attend to. 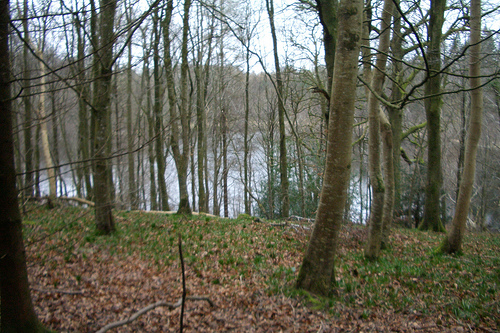 Preparations are almost complete for LOC 2009. Saturday, 5th April promises to be the biggest day in Fingal's history yet, exceeding Carnawaddy in 2005. Hopefuly the weather will be kinder to us this year. Bernie has booked a house for the weekend so many of us will be staying over on Saturday night. Bernie and Anyta are also planning to have a tea and refreshments tent at the finish.

Online Entries for LOC 2009 are now closed. Entry on the day courses will be available..

Planning continues for the Leinster Championships in April. Details are on the LOC 2009 page We had a meeting in Ashbourne last Tuesday and most things appear to be in hand. Rossmore Forest is also looking good at this time of year. Tommy is looking for volunteers so please get in touch with him to indicate what job you would like to do.

We had a very enjoyable pre-Christmas social on Dec 21st in the new Kellett's Hotel in Rolestown, formerly the Rolestown Inn. We had drinks and finger food, subsidised by the club. Most of the club stalwards were there, 16 in all, I think.

The club is having a pre-Christmas social on Dec 21st in Rush - details will be emailed / texted to members later. There will be a club meeting in January, Tuesday the 6th in the Foxes Den in Ashbourne. Main topics will be the 2009 Leinster Championships and the night event on the Hill Of Tara.

The next Fingal event is a night event on the Hill Of Tara, on Saturday, 31st on January.

The Connaught Championships took place last weekend, Nov 30th, at Lough Key Forest park in north Roscommon. It was a lovely clear sunny day, if a little cold and frosty starting off. The autumn colours of the trees and the castle in the lake made it a lovely setting. The map is a bit small for a championship event with a lot of paths and open parkland but the forest sections are really nice and provide very fast running with very few brambles, and plenty of depressions and other features for control sites. Fingal took home 5 first place prizes, Jean O'Neill W60, Eileen Young W40, Clara Jones W16, Val Jones M50, and Ciaran Young M40S. Also there were Kathryn Walley with Donal and Sean, Deirdre O'Neill, Pat Ryan, Ciana Jones, Rachel Barrett, Sarah Ní Ruairc, Bernie Sharkey and Alex Bogomoletz, Jim, Sandra, Shane, and Mark Hoare, and Eddie Hogan.

The Fingal Autumn League event went off well, with over 110 entries, good for Dun A Ri. The day was dry, even if the forest was very wet underfoot. There were some favourable comments on the courses which provided good tough forest running, and the brambles were no worse than earlier forest events in Mullaghmeen, CurraghChase, or Woodburn. Thanks to Tommy for planning, Ian for organizing, Donal O'Murchú of CNOC for controlling for us again, Ciaran for SI, and other helpers, Bernie, Anyta, Jean, Val, Ciana, and Clara. Click here for Results.

The next Fingal event takes place this coming Sunday, 16th November, at Dún A Rí Forest Park, Kingscourt, Co. Cavan. The event is a standard Leinster League event, SportIdent will be used. Course details are as follows: 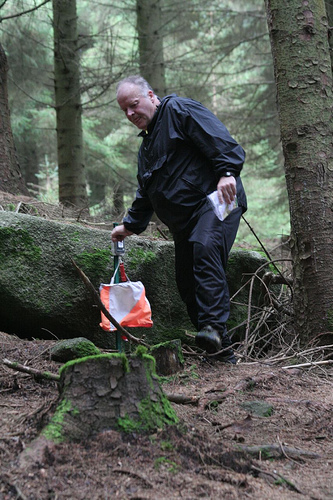 <- Tommy Burke at a recent event in Three Rock

The 2008 Fingal Scatter League is complete. The final event took place on Sunday September 21st at Malahide Castle, with prizegiving afterwards. Gerard Butler won the Long Course again this year, with Catherine King (Long) winning the Female Long. In fact, the Long family (no pun intended) went home happy with Roisin best Junior Female on the Short, Ruairi best junior Male on the Short, Dad Mike 2nd on the Long, and as mentioned, Mom Katherine best female on the Long. There were also some Fingal prizewinners, Barry Twohig pipped Alex Bogomoletz to win the Medium Male, with Sarah Ni Ruairc winning the Medium Female. Eoghan Byrne and Donal Kearns were 2nd and 3rd on the Junior male short.

The League is gaining in popularity, and is introducing many newcomers to orienteering. It also provides visibility to orienteering - at each event we get many enquiries about what is going on and how can people participate. Hopefully we will be back again next September.

The league events were as follows.


Final League Table, after 4 events Only those completing 3 events listed. Congratulations to all prizewinners, and thanks again to all who participated.

Thanks to all club members who helped out - planners Jean, Ian, Dave, and Alex, as well as Ciaran, Eileen, Tommy, Bernie, Anyta, Ray, Mick, and Deirdre.

Apologies for the access problems to Ardgillan last Sunday. In future we will try not to clash with a motorbike race.

A popular inovation this year is our season ticket - a reduced price per event if you pay for the four events in advance. Season tickets are 20 euro for an adult, 10 for a junior, versus 7 euro adult, 3 euro junior individually for each event

The events are all the same format as last year. Everyone starts at the same time at 12.00 noon. There will be 20 controls, the runners on the long course must get 18 controls, 12 on the medium, and 6 to 8 on the short. We will have prizes at the final event for male and female first, second, and third on each course. Best 3 out of 4 events to count. 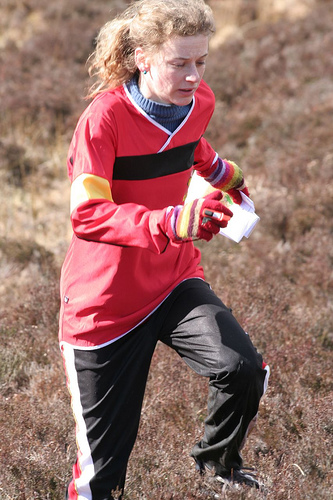 <- Milena Andrade at the Leinster Championships

Kathryn is still busy running a school event in Balrath Wood. John Rowe has also run an event for the juniors in Trim Athletic Club in the grounds of Trim Castle and the nearby park along the river Boyne. Meanwhile Tommy and Val are busy finalizing the map at Rossmore for our Leinster Championships next year. Several members went to the Irish 3-Day on Inishboffin where they enjoyed glorious weather. Some of the Kearns and Crowe juniors won prizes. Jean unfortunately injured her knee on the last day - we hope she recovers well. Fiach is also travelling to Sweden for the Junior World Championships, and Deirdre took part in the Jukola / Venlo relay in Finland as a guest on the Setanta female team. Generally busy times all round during the so-called quiet season.

The Tara Sprint series was a great success, exceeding all our expectations. The 3 events at Dalgan Park, the Hill of Tara, and Balrath all had between 70 and 100 competitors. A good number of families, juniors, and scouts turned out, and even some tourists at the Hill of Tara were persuaded to try orienteering. Many experienced orienteers also turned out and enjoyed the runs, even if the orienteering wasn't very technical. Many thanks to Kathryn and Tommy for planning and organising the events, and to all other club members who helped out.

There was a prizegiving at the end of the final event at Balrath for Juniors. Most juniors who completed the league got prizes.