We had a dry day and about 130 competitors for a very enjoyable event in Castletown House on the 7th of February. Ian Murphy was planner and Sarah Ni Ruairc was organiser. The event went off very smoothly even though many of the club stalwards such as Tommy, Bernie, Alex and Ray were not there. The teas and coffees provided by Anyta were greatly appreciated, and the hot chocolate was a big hit with the kids. Thanks to all who helped out, including Ian, Sarah, Anyta, Dave, Fiach, Rory, Jim, Val, Deirdre, Jean, and Kathryn. Results are here. Nice to see a Fingal runner winning the Long course.

Castletown event - 7th February. Ian Murphy is planning it, Sarah Ni Ruairc is organiser and controller.
There will be three courses on offer: Long, Medium and Short.
Starts from 11am and courses close at 3pm.
Prices are €8 for adults, €4 for students/juniors/OAPs/unwaged and €20 for families. There will be free entry for OPW staff and their families on production of a valid OPW staff ID card.
Punch cards will be used, not SI.
Parking will be in the same location as before, i.e. the car park behind the house itself. Access will be via the roundabout at the M4. There will be pedestrian access only from Celbridge village. The event will be sign-posted from the M4 (exit 2a signposted Leixlip (West) and Celbridge (West)). Anyone getting public transport can get a 67 or 67a bus to the pedestrian gate in Celbridge village itself.
The coffee shop in the house will not be open.

The Rossmore Training weekend took place last weekend. Everyone had a great time as well as learning a lot of the basic techniques for improving orienteering navigation. Right up until a few days before the weekend it was doubtful if we could go ahead because of the weather and our original accomodation was flooded. However thanks to Bernie we managed to contact Armagh Hostel who were delighted to have us. When we arrived at Rossmore the gates of the forest were locked, due to ice in car park the previous week - but it was fine when we were there. Luckily we had the tent to put up in the carpark to serve as a base. On Saturday we did a series of exercises mainly devised by Fiach - Compass work, thumbing the map, pacing, following a line, aiming off, relocating, and contours.

On the Sunday we had planned to do a course from the Leinster Championships - but someone (!) left the maps in the hostel. So another course was quickly planned and set up. It was still a pretty technical standard and a step-up from what most of the juniors were used to. When that was finished we had a bit of fun with a micro-o course that Fiach set up in the car park.

Hopefully you all know by now that Alex and Bernie's celebrations have been postponed from last Saturday until the 27th of February. due to the snow and ice. All club members are invited to Fingallians GAA club in Swords that night, so keep the date free, and hopefully we'll have better weather then

At this stage there is no point in deciding what to do about next weekend's training event. It's currently raining here in North Dublin but we don't know what it will be like at the end of the week. We will decide later in the week, so check this site, and your email and text messages.

Congratulations to Bernie and Alex who got married in Paris before Christmas. They are having a party in Fingallians GAA club in Swords on Saturday, January 9th.

Next up on the club Agenda is a training weekend in Rossmore on the 16th and 17th of January.

The next Fingal event is a night orienteering event in St. Anne's Park on Tuesday, December 15th.

Plans are afoot for a training weekend on the weekend of January 16th/17th. Training will be in Rossmore and we will be staying in the Tannagh adventure center on the Saturday night. Training will start with the basics, such as map reading, using a compass, and pacing. Fiach has has some ideas fo training exercises. If you are interested in coming along let Bernie know, 087 9162125, as she will need to give numbers to the adventure center. 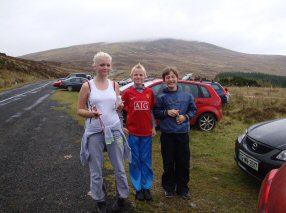 Welcome to the Rektins Bormane family who have joined us. They live in Monaghan very close to Rossmore. Pictured here are Nadine, Rainers, and Sandis.

After doing the job for more than 10 years Tommy has stepped down as club secretary. Anyta Richardson has very kindly stepped in to take over. Many thanks to Tommy for all the background work over the years, and also thanks to Anyta for taking on the job. Also belated congratulations to Anyta and Dave who got married at the end of August, and congratulations to Alex and Bernie who are getting married in December. They are getting married in Paris but will have a party after Christmas, watch out for details

We are planning to have a training weekend in January, on the 16th/17th. The plan is to have the training in Rossmore and to stay in the Tanaa adventure centre in County Monaghan. Contact Bernie if you would like to attend, 0857282268. 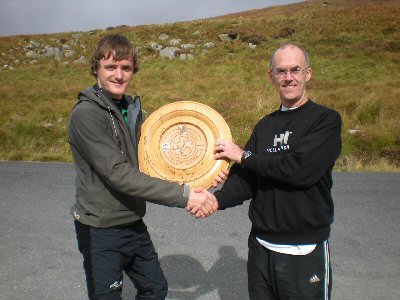 To the surprise of everyone, including ourselves, Fingal pipped CNOC to win the GEN Leinster Inter Club Challenge Trophy. CNOC, so confident of retaining it no doubt, hadn't brought the trophy, so it was presented to us at Scarr the following week. The photo (Finn Van Gelderen) shows David Healy of GEN presenting the trophy to Val Jones.

The GEN Leinster Inter Club Challenge is on next Sunday in Corkagh Park, Clondalkin. See details on the GEN Website. The format this year is 4 sprint events with runners scoring in their age class, so the more we have out on the day the better chance we have. While other clubs might be strong in some classes we have a good range of runners across the junior and senior classes - assuming of course that we come and run on the day.

Best wishes to Ian Murphy, taking part in a channel swim. Unfortunately the swim had to be posponed due to bad weather, while we were basking in sunshine. Check the link for details of a rescheduling.

Click here to see the details, and to sponsor him.

The 2009 scatter league is now over. Prizegiving took place after the last event at Malahide Castle. Congratulations to all prizewinners. As before there was keen competition particularly among the juniors, and everyone had fun and enjoyed the events. Thanks to all who helped out at the 4 events, Ray, Dave, Anyta, Ciaran, Eileen, Rory, Bernie, Alex, Jean, Deirdre, and Pat. Hopefully I haven't forgotten anyone.

The events are all the same format as last year. Everyone starts at the same time at 12.00 noon. There will be 20 controls, the runners on the long course must get 18 controls, 12 on the medium, and 6 to 8 on the short. We will have prizes at the final event for male and female first, second, and third on each course. Best 3 out of 4 events to count.

These events are suitable for all ages and levels of fitness. They are a great introduction to Orienteering and no experience is necessary. There will be club members available to give a quick run through of what to do.

Best wishes to Shane Hoare, going to the JHI in Angelsea this weekend, and to Ian Murphy, who is taking part in a channel swim.

Other Fingal Events for the coming season

Val Jones, Clare Hopkins, and Ciana Jones on the run at the last day of the Scottish 6-day 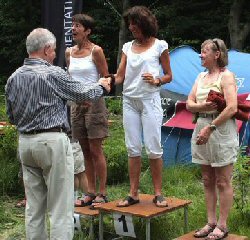 <- Jean being awarded 3rd place prize at the Belgian 3-Day.

Jean attended along with Tommy and John Rowe. 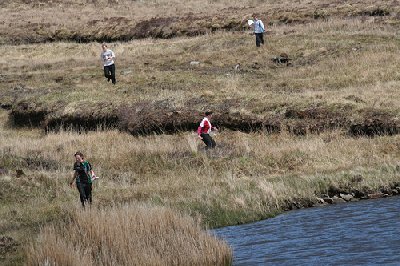 Another memorable Irish Championships took place in Donegal on the May Bank holiday weekend. The area was just north of Donegal town, off the road to Letterkenny. It was essentially one large area that was surveyed, with different sections used for the different days. It was mapped by Pat Healy and Padraig Higgins. The terrain was nearly all open mountain with plenty of lakes, marshes and bogs, but the rock features were not as extensive as some other open areas. There were some tracks leading up into the terrain, but once past a certain point there were almost no man-made features. The Middle distance championships were on the Saturday, the Classic Championships on the Sunday, and the Relays on the Monday. The Event center was in a local community centre, where there were many extra activities particulary on the Sunday, that included prize giving by An Tánaiste, Mary Coughlan, as well as the IOA AGM, winners route presentations, and a table quiz.

Tommy has taken reponsibility for the Leinster Fixtures for the coming year. Provisional Fingal Fixtures for next season are as follows